Megan Smith has been blurring the lines between art and applied science since the day she set foot in the Okanagan. 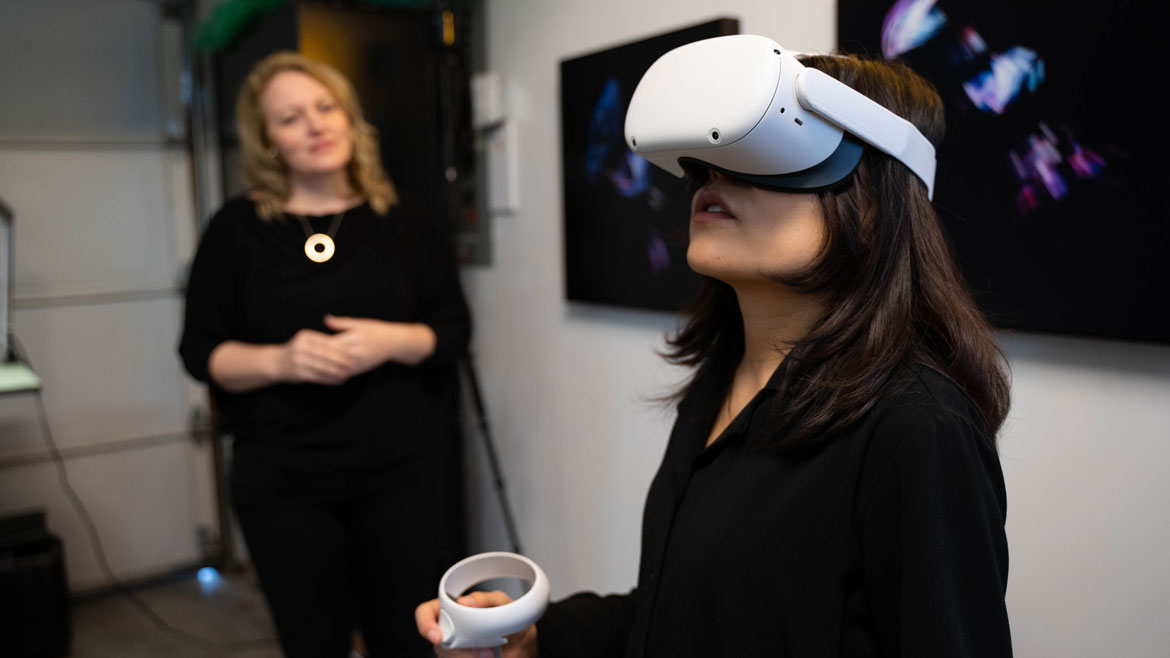 MEGAN SMITH SET UP SHOP IN HER GARAGE LAST SUMMER and hasn’t looked back. She is sitting in her now refurbished studio, a sleek, modern design space with a cheerful neon sign that reads “you’re muted” – a witty homage to the realities of virtual life.

Just over a year ago, Megan moved across the country during a global pandemic to begin a new life in the Okanagan. “It was time to make a move,” she reflects, describing the opportunity to build her own research lab, expand her collaborative work, and take the next step in her academic career.

UBCO’s renewed Bachelor of Media Studies and strong visual arts program, the close-knit sense of community, and Okanagan lifestyle ticked all the boxes and lured her west from Regina.

Raised in an artistic, rural community in the Outaouais region of Québec, the appeal of a small, regional city like Kelowna felt more like home to Megan, who admittedly isn’t a fan of big cities. 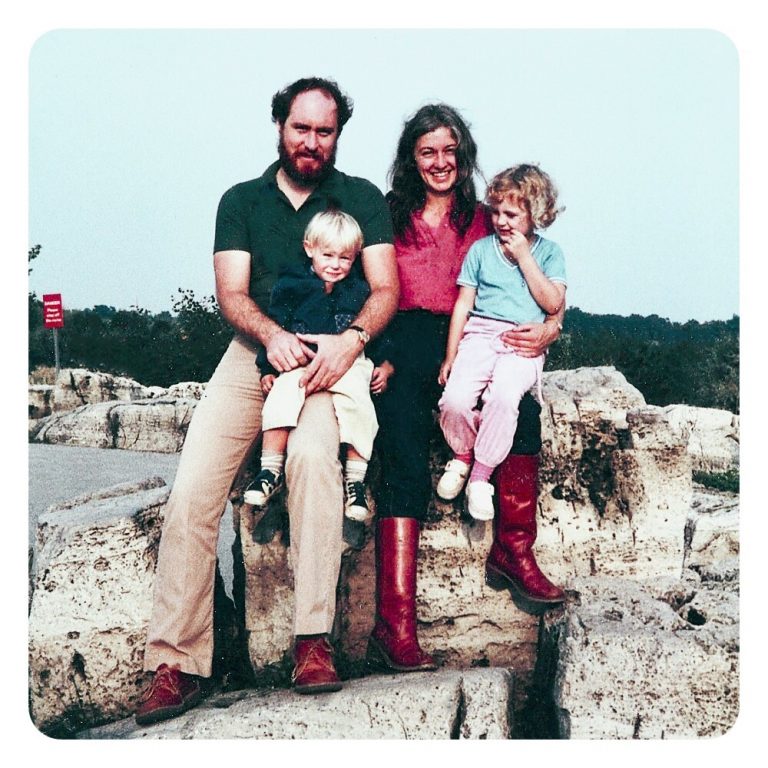 Megan Smith (right) with her parents and sibling.

Her parents’ early careers as biologists at Carleton University influenced her path. Her mother was a researcher in an entomology lab, and her father studied environmental disturbance related to oil exploration in the Mackenzie Delta. He was later involved in reconstructing past environments in Canada’s High Arctic while working for the Federal government.

Her maternal grandfather had worked for the Canadian Armed Forces and flew over much of northern Canada during the 1960s taking photographs that were used to develop the topographic maps still referenced today.

These family influences have undoubtedly shaped her research and artistic career and infused her passion for exploring how the environmental, societal and ethical implications of new technologies and creative interfaces are designed and implemented.

To Serve and Protect

The Okanagan drew her, in part, because there are only a few places in Canada where her computational art research can thrive. “I can make my way relatively easily in places like Ottawa, Montreal or Regina”, says Smith, referencing cities with strong military and paramilitary research centres.

She views the Okanagan as another innovative centre for safety and security research, noting her initial curiosity around UBC’s Survive and Thrive Applied Research (UBC STAR) initiative. Conversations with the UBC STAR team began early and have helped expand her research.

Over the past four years, Smith has built a successful research partnership with the RCMP and is putting the finishing touches on a new scenario-based virtual reality training program for cadets, scheduled to launch at a brand new, purpose-built training facility in 2023.

She has designed a full complement of 3D-printed virtual reality tools embedded with sensor and camera technology to simulate police safety equipment, including an Oleoresin capsicum (OC) canister (pepper spray), a conducted energy weapon (taser), and a general duty firearm. 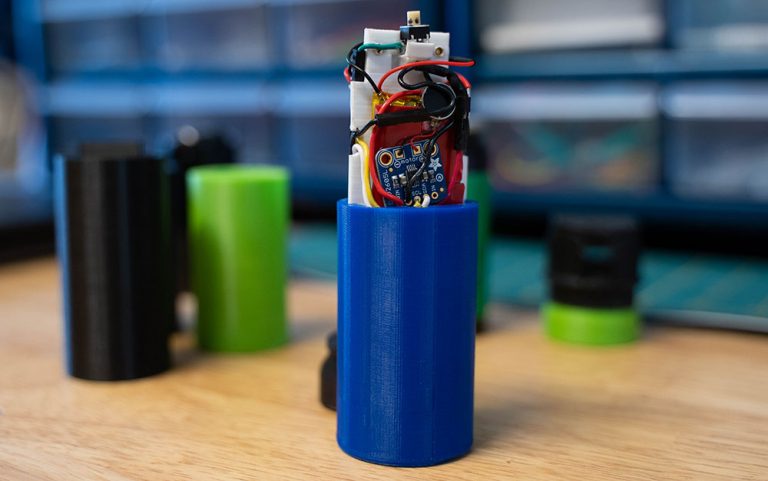 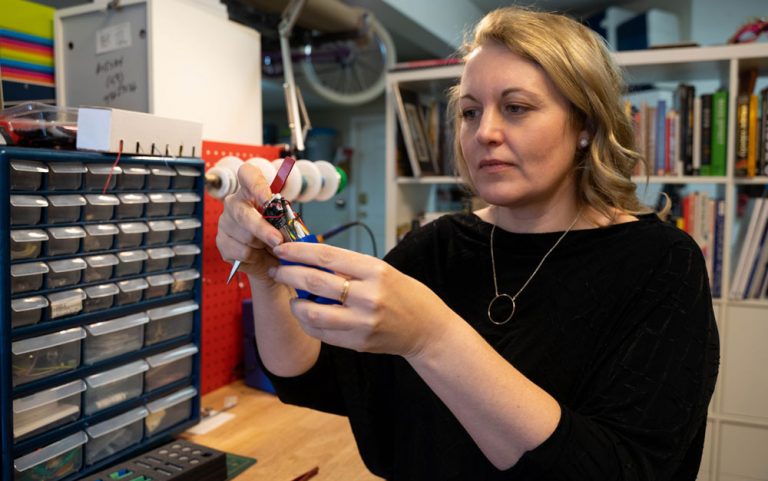 One of her major breakthroughs was successfully integrating physical cues that look and feel like the real thing to help trainees avoid ‘breaking presence’ and keep them immersed in the VR training scenario. She has incorporated an authentic grip and trigger from a Smith & Wesson pistol into a custom-designed VR remote prototype.

The aim is to create a simulated environment to augment real-life training exercises, and provide data-driven insights to reduce risk in the field and make law enforcement safer. 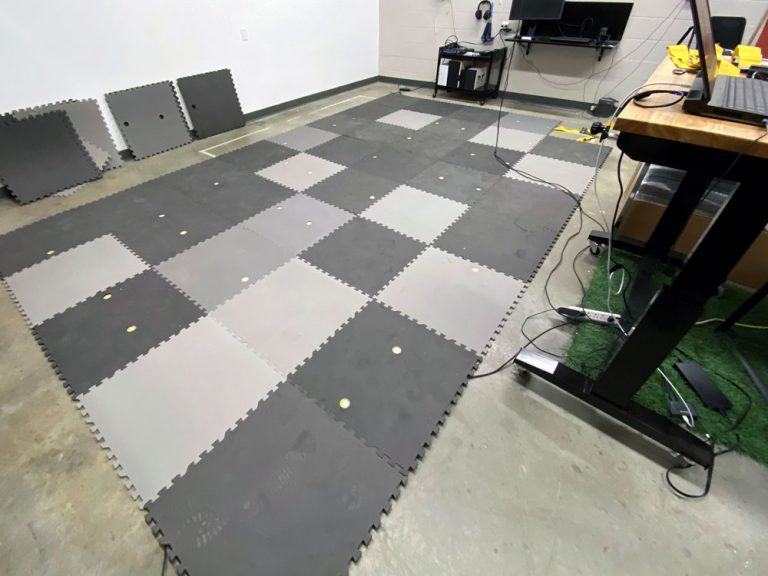 Holding up a piece of an inside-out floor system recently imported from Russia, she describes how the high-tech mat developed by VR start-up Antilatency will be used in combination with the new VR tools she has designed for the RCMP.

It resembles a modular rubber floor tile typically found in a gym or workout facility, but is carefully embedded with infra-red sensors designed to map and store environmental data using head-mounted displays and VR motion controllers.

While COVID-19 stalled some of her progress on the RCMP project, Megan is making new connections with colleagues like Professor Abbas Milani in the School of Engineering, who recently invited her to participate in the newly funded CREATE Immersive Technologies (CITech) program for graduate students.

“I see a future in the way computer science, engineering and art practice can come together to allow us to think and design critically.”

Having helped the bespoke Bachelor of Media Studies (BMS) program flourish with 489 students applying for a coveted 25 seats this year, Smith is the first faculty member appointed to teach in the new Master of Design (MDes) program – slated to launch next spring.

Her new CFI-funded Critical Future Studio Lab will be located in the new Annex building, where she plans to open up her studio doors and invite the community in for conversation, workshops, and art installations demonstrating how electronic systems interact in the real world.

Her latest project is ‘All the Stars We Cannot See’, which was built over the winter with Digital Arts & Humanities PhD student Gao Yujie. The immersive screen, designed to expose the density of space traffic and the jaw-dropping 23,000 satellites that travel overhead, will be displayed at UBC Okanagan’s new Visualization and Emerging Media Studio (VEMS) this fall. 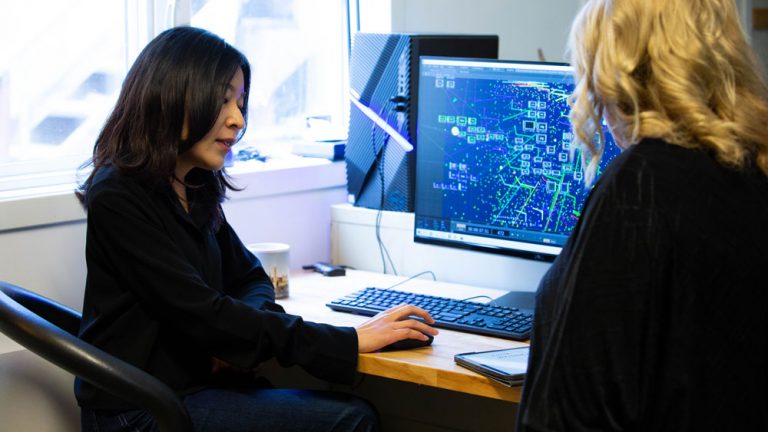 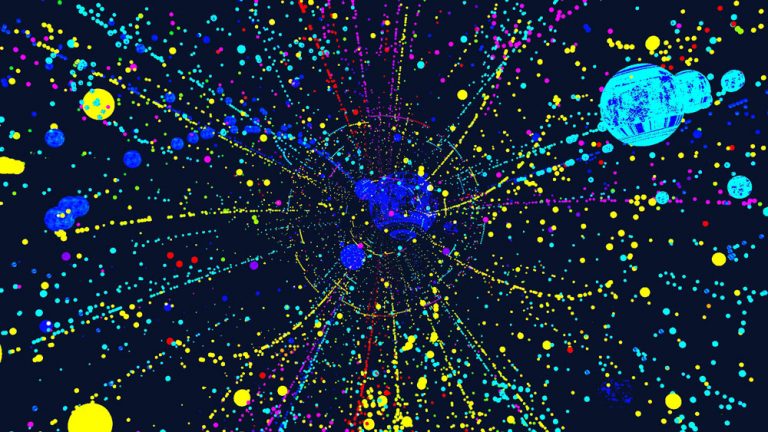 The driving force behind Smith’s work is to help people question the everyday interactions we have with technology and train the next generation of designers to make ethically and environmentally conscious choices.

“I see a future in the way computer science, engineering and art practice can come together to allow us to think and design critically.”

Megan believes universities can be leaders in telling stories through art. “We have all of these incredible students who are right in the peak of questioning society and the influence of inventing.”

By discussing the implications of digitization from multiple perspectives, Smith is helping the next generation of artists make responsible choices in their own design work, as leaders in their field, and as humans in an increasingly complex world.